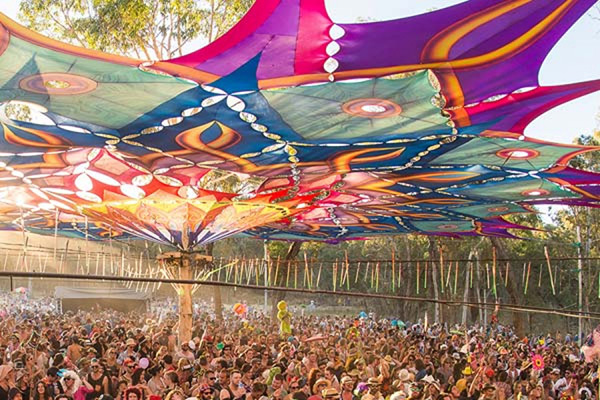 CANCELLED – Rainbow Serpent Festival
DUE TO CURRENT COVID-19 SITUATION THE EVENT ORGANISERS HAVE DECIDED TO CANCEL THIS YEAR’S EVENT FOR THE SAFETY OF ALL PATRONS AND PARTICIPANTS.

Rainbow Serpent Festival has been an unmissable fixture on Australia’s annual festival calendar for over 20 years. The internationally renowned gathering has developed into one of the most highly regarded music and arts festivals on the planet. Due to bush fires in December 2019 the annual Rainbow Serpent Festival had to be cancelled. However the event organisers have put together a new event over the Easter long weekend to continue the Rainbow Spirit!

Join us in April 2020 for a celebration of community, culture, unity and diversity. Experience world class producers, DJs and bands, explore awe inspiring art, sculpture and nourish your mind and body with inspiring speakers and workshops.

Rainbow Serpent Festival would like to acknowledge that this festival is on the Traditional Countries of Dja Dja Wurrung and Wadawurrung Peoples. We pay respect to their Ancestors, Elders past and present, along with today’s descendants that carry on the living culture and ensure its survival for future generations.